Coral reef ecosystems are among the most diverse and productive ecosystems on the planet yet they are suffering significant declines due to human impacts. Because many people depend on reefs and reef fisheries for their livelihoods it is highly important to gain a better understanding of how reef fisheries work. In previous research we were able to document how coral reef ecosystem productivity varied across the Northern Line Islands including islands with and without human habitation. We found that in general reef fishery productivity was lower in systems that are heavily fished. In this upcoming expedition we seek to investigate the complementary question – how does reef ecosystem productivity vary across natural conditions? We will isolate the effects of natural variability by studying a series of uninhabited islands in the Southern Line Islands group. In order to develop effective conservation targets and management strategies we need to know the range of possibility for fisheries across natural gradients in oceanography in the absence of people.

JOURNEY TO THE CENTRAL PACIFIC

Stretching 2,350 km in a northwest-southeast direction approximately 1,000 miles south of the Hawaiian Islands are a chain of eleven atolls called the Line Islands. The geological history of the Line Islands is complex. It is thought that the islands formed as volcanoes over a series of hot-spots, as opposed to a plate moving over a single hot-spot as is the case with island chains like Hawaii. Today only 11 of the Line Islands are visible, at best a few meters above sea level. The remote nature of these islands, coupled with the biodiversity found here make them ideal areas to study coral reefs.

ONE OF THE LONGEST ISLAND CHAINS IN THE WORLD

The Southern Line Islands are all uninhabited islands within the Republic of Kiribati. These islands protect some of the most pristine and intact coral reefs remaining on the planet, and serve as an invaluable setting to study how coral reefs work in the absence of human disturbance. Interestingly, these islands span a wide range of natural, oceanographic conditions, with the local waters ranging from very nutrient-poor to higher-nutrient upwelling zones. The Southern Line Islands present an unparalleled opportunity to study how oceanographic conditions alter the ecology of a coral reef independently of any effects of humans. 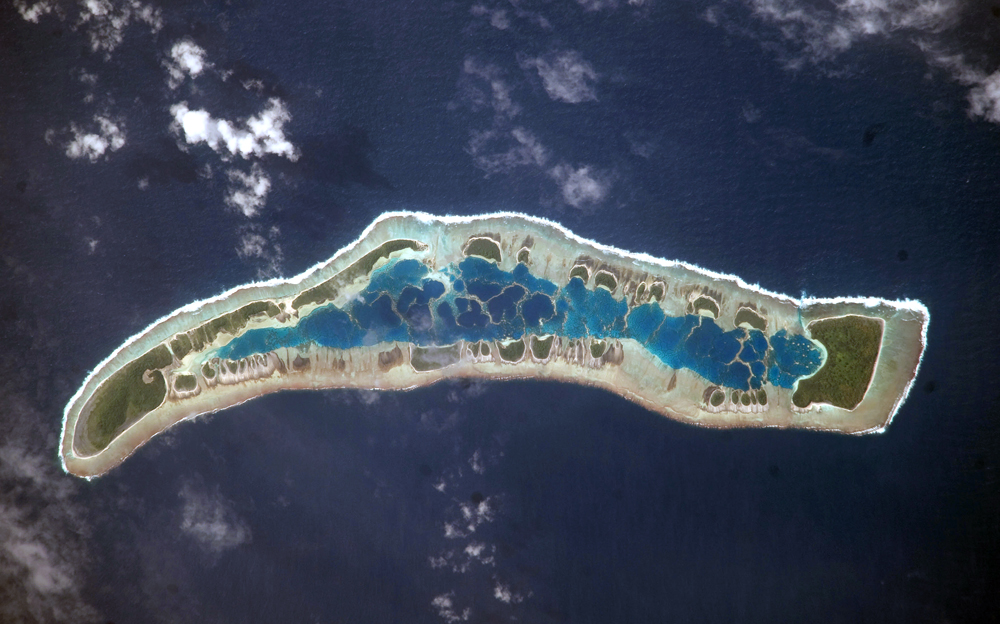 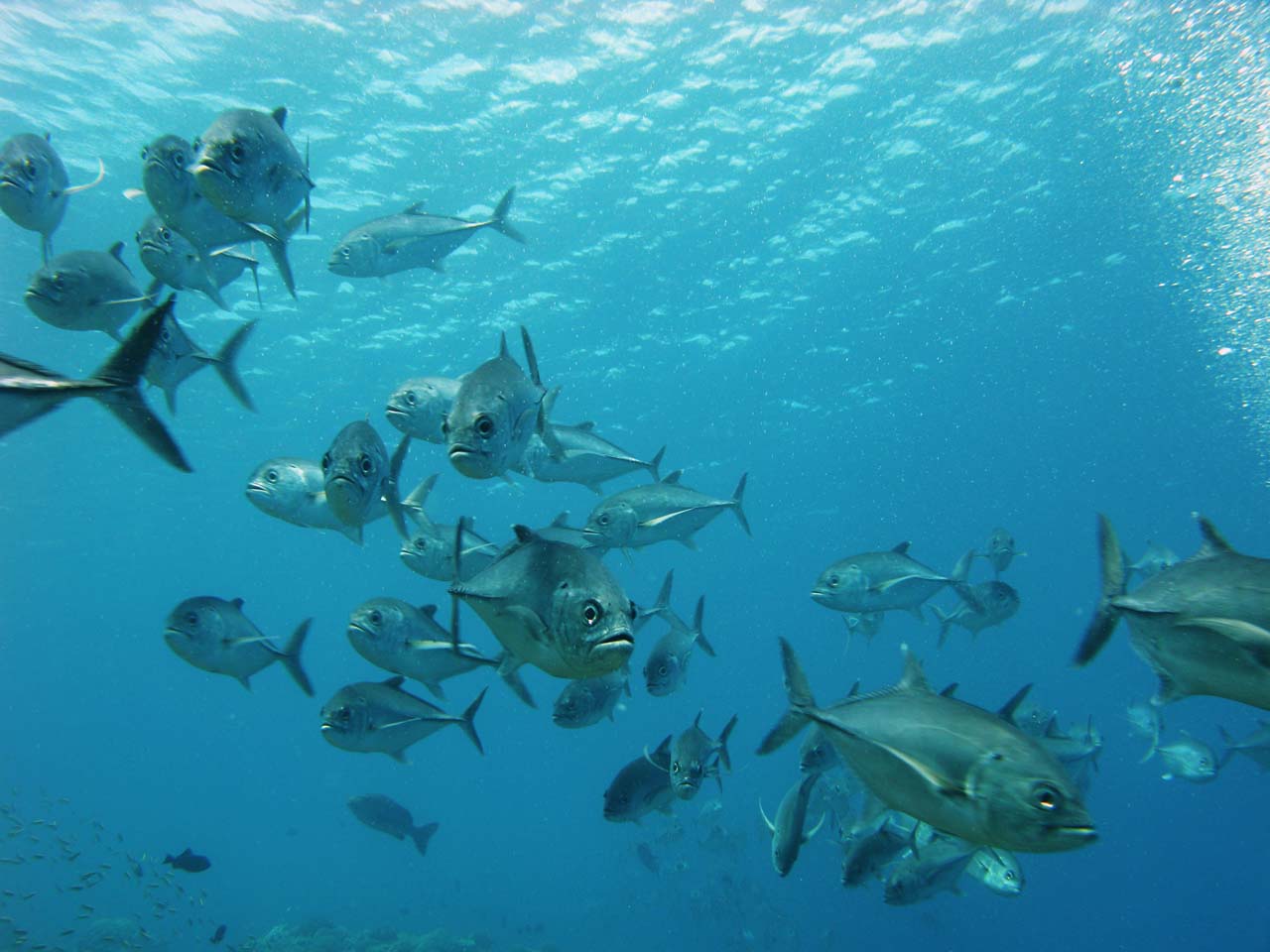 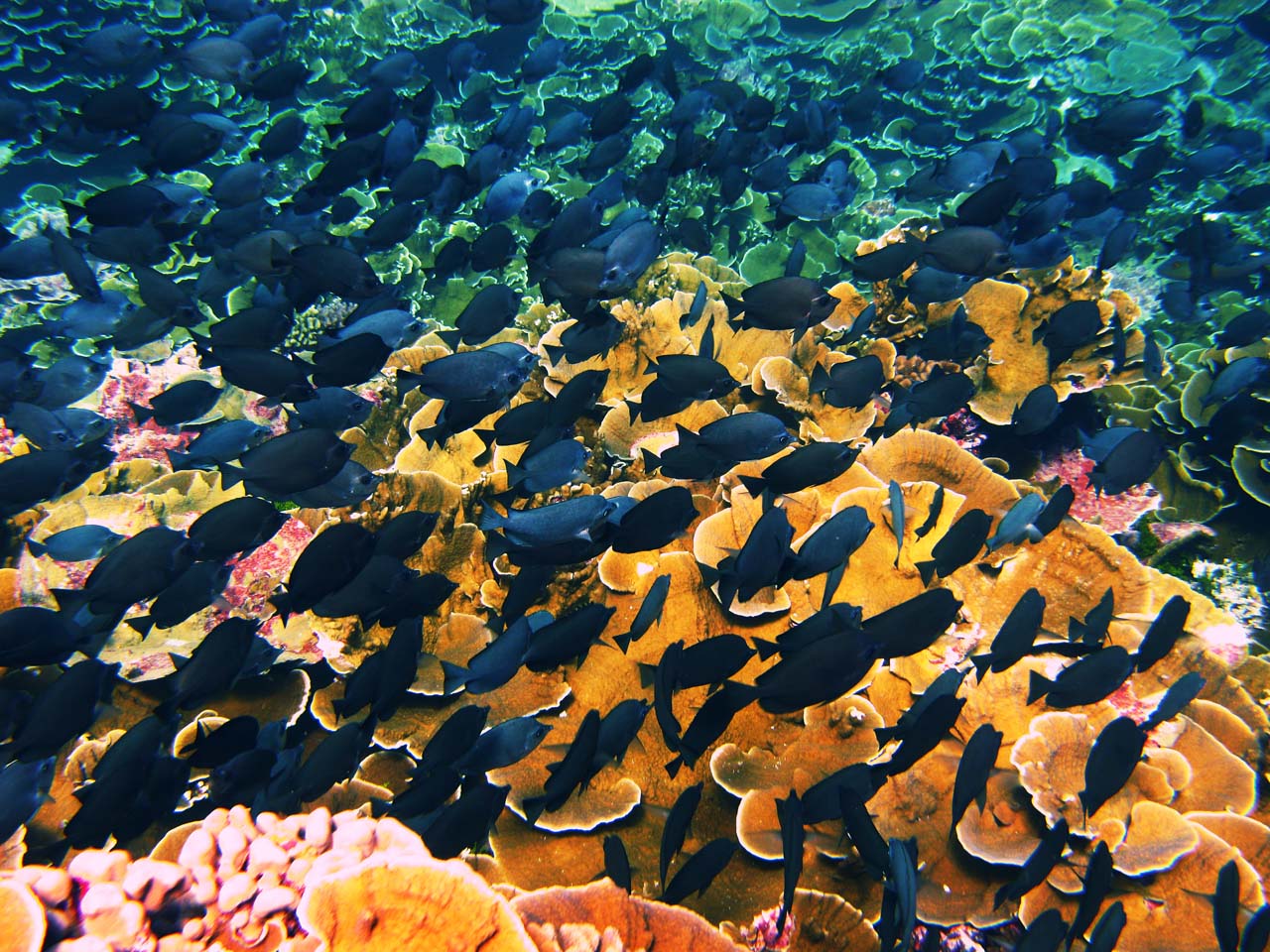 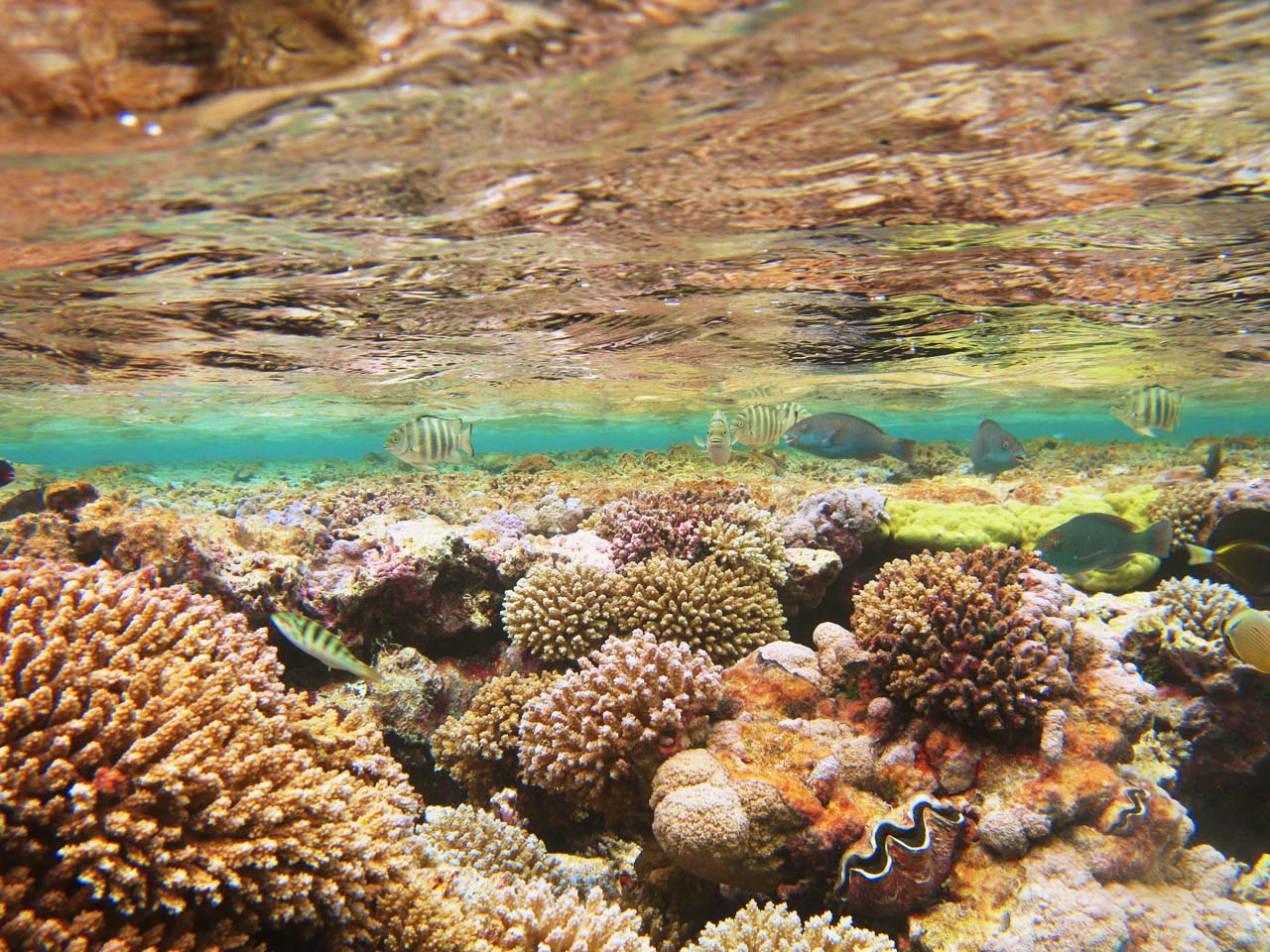 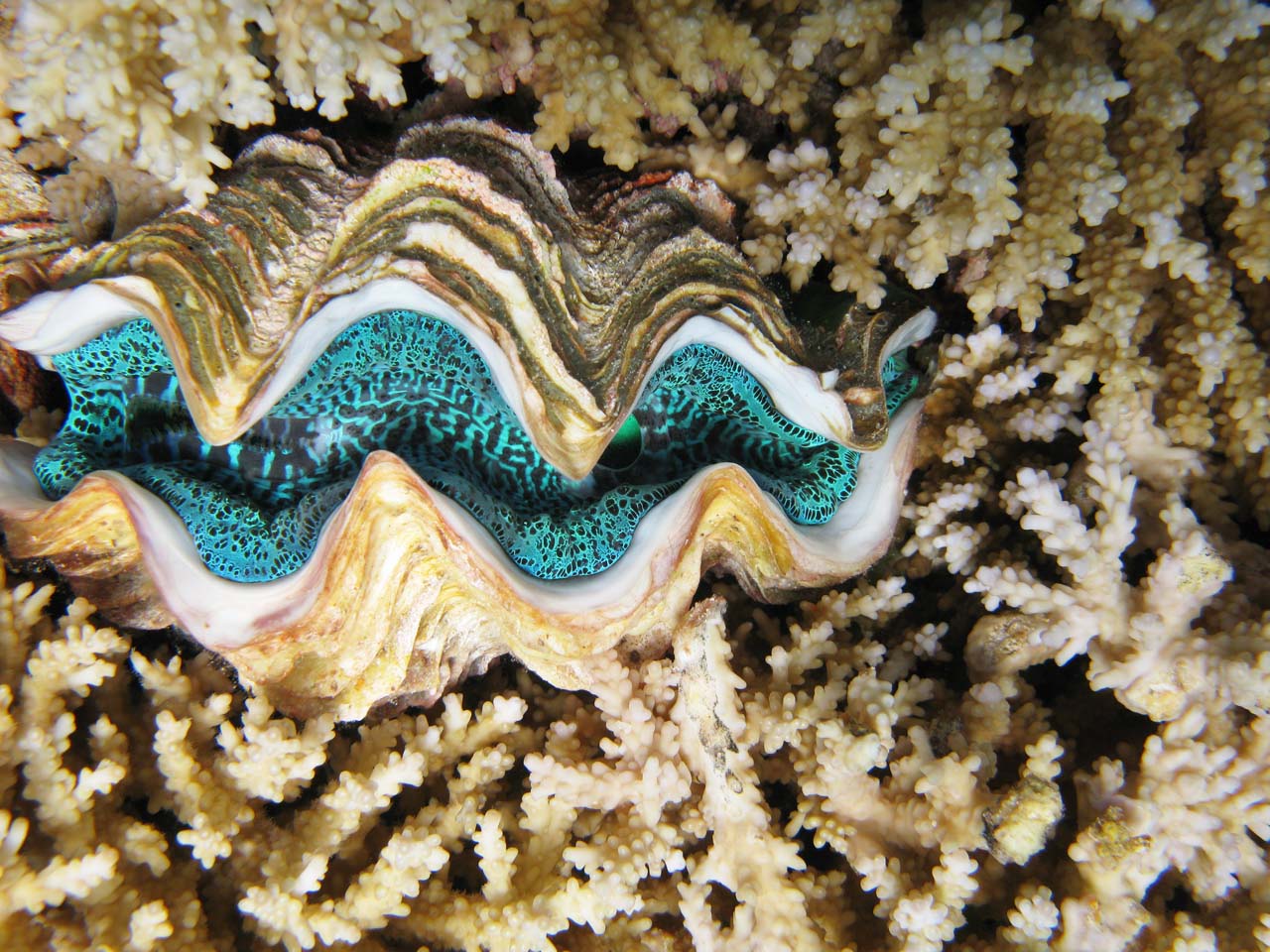 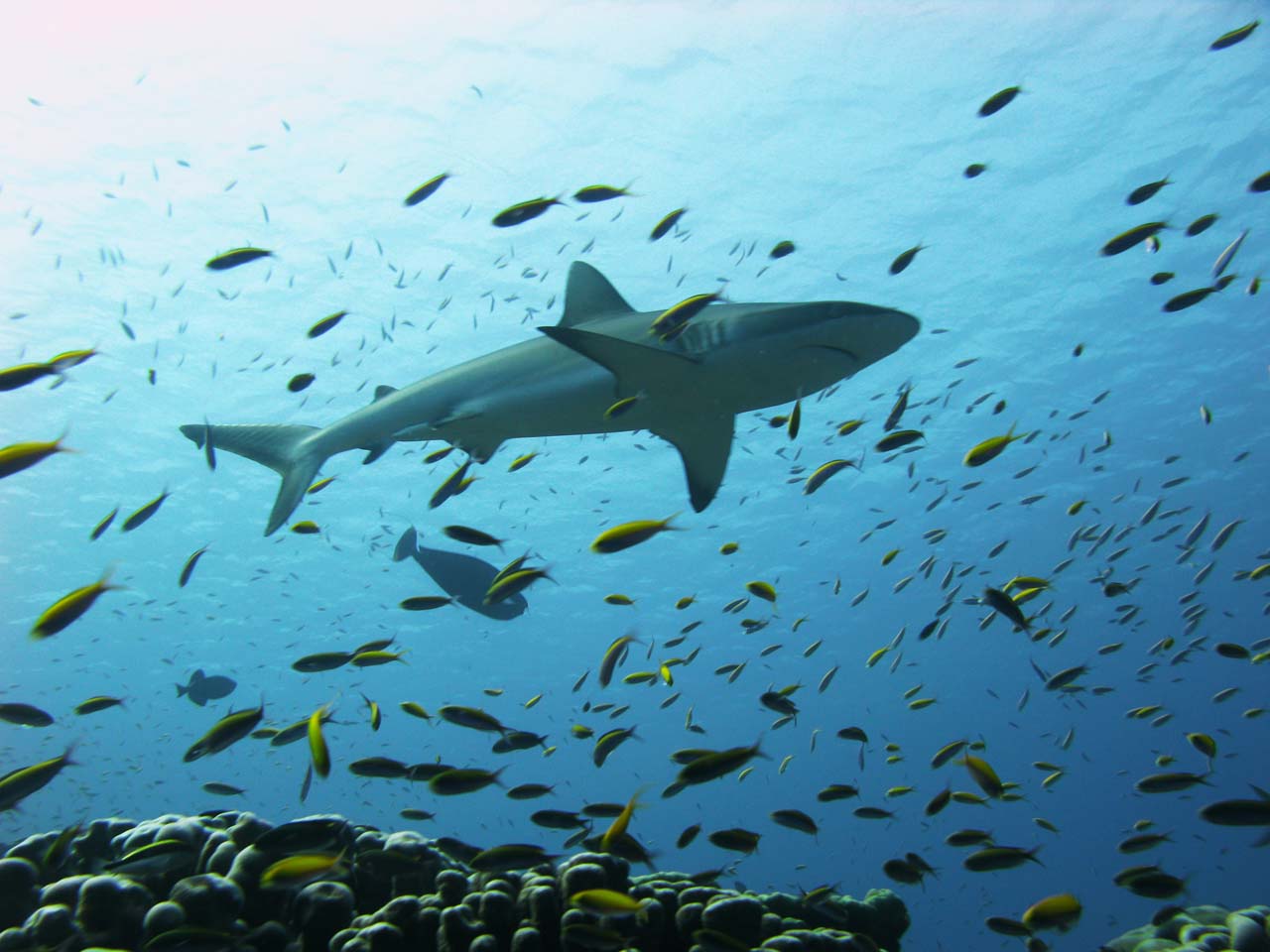 Millennium is considered one of the few remaining coral reef ecosystems in the world that is relatively pristine. Inside the lagoon, the dominant corals are branching Acropora, forming plentiful patch and line reefs. These reefs likely provide important nursery habitat for important fisheries species like the blacktip reef shark (Carcharhinus melanopterus) and Napoleon wrasse (Cheilinus undulatus). Both species are heavily exploited throughout the Pacific, the Napoleon wrasse being under consideration for listing under the Endangered Species Act. However, they are abundant at Millennium.

While the large fishes are some of the most striking underwater and contribute to the large fish biomass on the reef, notably 4 out of every 5 fish on the reef are damselfishes. These relatively small-bodied fish are found amongst the fingers of the abundant Acropora corals. The whitetail dascyllus (Dascyllus aruanus) accounts for 35% of all fish in the lagoon.

Macroalgal cover in the lagoon is low, likely due to the large number of herbivorous (plant-eating) fishes and urchins and competition for space with corals. On the reef crest that is exposed during low tide, crustose coralline algae, a pink calcifying algae that glues the reef together) and turf algae are present.

The lagoon also hosts a large number of giant clams (Tridacna maxima), with an average of 3.5 clams per square meter in the north central regions. The southern part of the lagoon was reported to have an average of 35 clams per square meter in an 1988 expedition and indeed was found to have one area of 100% clam cover in 2009. However much of this area was littered with dead clam shells, possibly due to human poaching or aerial uplift of the island, leaving the shallow clams too far out of the water to survive.

Reef development inside Millennium lagoon are due to the dynamic growth and erosion processes, likely punctuated by changes in sea level and disturbance over thousands of years. As the reefs inside the lagoon grow, pillars of calcifying corals and algae have grown together, forming saddles. The result is a reticulate reef formation, which further influences water flow inside the lagoon. Notably, these pillars often grow east to west, which provides animals that eat plankton out of the water column with the greatest access to their food supply.

The outside of the island is surrounded by fringing reef. The windward side, exposed to frequent and large Pacific swells, has reef that rapidly slopes off from shore. The reef on the leeward side begins as a reef terrace that later turns into a steeper reef slope.

ON LAND AND IN THE AIR

Among the animals and plants on land at Millennium Atoll are plants and animals on land are the coconut crab (Birgus latro), named for its ability to crack open coconuts with its claws and Pisonia grandis, a species of flowering tree in the Bougainvillea family. Coconut crabs can grow to be 70 cm in body length (not including legs), have a leg span of 1 m, weigh a few kilograms (with some estimates over 4 kg), and live for decades. Because of their large size and their fabled taste, the coconut crab has been harvested extensively from the inhabited Line Islands. However, remnant populations of crabs thrive on the uninhabited islands with population estimates of hundreds of thousands to millions of crabs.

Pisonia can form dense forests up to 20m in height and provide nesting habitat for a variety of seabirds. Once felled, their wood is relatively weak and rots quickly. While these forests were once abundance throughout the Pacific, in many locations with human habitation they have been replaced with nonnative coconut palms. These non-native coconut palms are also evident on Millennium, left over from a brief fifteen-year attempt by S.R. Maxwell and Company to export copra (dried coconut meat) before the company went into debt.

There are two particularly large populations of nesting seabirds on Millennium. Sooty Terns (Onychoprion fuscata), number about 500,000 individuals largely on the eastern islets of the atoll and Great Frigatebirds (Fregata minor) number approximately 10,000.

In addition to Millennium Atoll, there are four other Southern Line Islands: Malden, Starbuck, Vostok, and Flint. All of these islands are part of the Republic of Kiribati and are currently uninhabited with minimal past or present human impact. 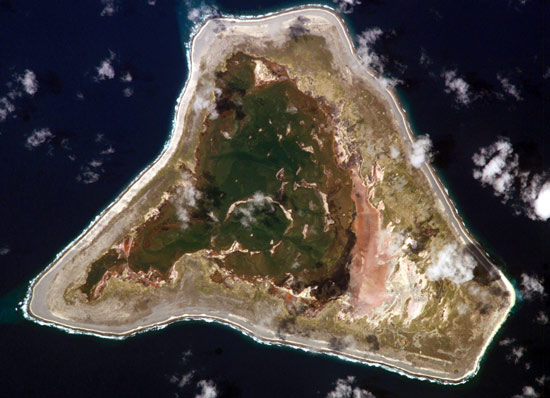 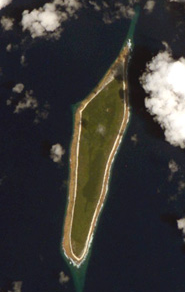 Malden is approximately 11 square miles with large interior salty lakes. It has evidence of previous habitation by Polynesians before European discovery. Guano deposits were mined in the early 20th century and depleted by 1920. The British used Malden to test nuclear weapons in the late 1950’s. It became a wildlife sanctuary and reserve in 1975 before the formation of the Republic of Kiribati in 1979.

The island is named after Valentine Starbuck, who first spotted the island in 1823 from his British whaling ship. It was annexed by Britain in 1866 and mining for guano began shortly thereafter, continuing for the next 50 years. The island is barren and uninhabited, but home to breeding populations of millions of sooty terns, among other seabirds. Similar to Malden, Starbuck has a continuous land edge with inland salty lakes.

Vostok is a 24-hectacre island that occupies most of the reef platform upon which it rests. Vostok and Flint are the most southern of the Line Islands and receive less rainfall than the other islands (approximately 500 mm per year). These average rainfall patterns are a result of the islands’ location south of the intertropical convergence zone, which remains north of the equator throughout the year in the region of the Line Islands. Vostok is only one square mile with no anchorage in the lagoon. It was named in 1820 by the Russian Antaractic explorer Bellingshausen who named the island after his ship. The island was never exploited for guano and attempts at establishing a plantation there in 1922 failed. As a result, Vostok’s indigenous flora is the least disturbed of the Line Islands.

Flint is the southernmost island of the Southern Line Islands. It has an area of one square mile with several brackish lagoons. Like Vostok, it receives much less rainfall than the other Line Islands (500 mm per year). The island was developed for guano working and copra plantations
in the late 1800’s. While most of the native flora was replaced with coconut palms, the coconut crab population is in the tens of thousands.