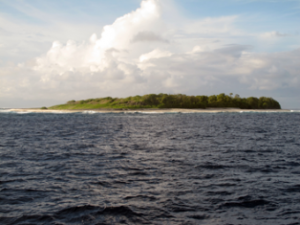 Windswept Vostok Island: The vegetation of Vostok is composed almost exclusively of the native Pisonia tree 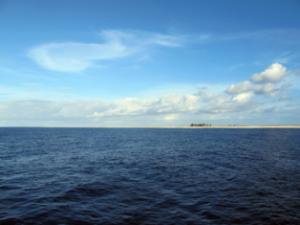 Starbuck Island: The majority of the trees on the island are found in this one small grove of coconut palms.

Where Did The Trees Go?

We have arrived to Starbuck island, the first of our stops in the more nutrient-rich waters of the southern Line Islands. Lying at about 6 degrees south latitude, we are now within about 350 nautical miles from the equator. A tongue of cooler water pokes into the Line Island archipelago from about this latitude in the south to about 3 or 4 degrees north latitude. It is because of this variation in oceanographic conditions that we are visiting these islands. While our goal is certainly to study the undersea biology, we start with the topside of each island.

As we approached Starbuck early the first morning, our best indication that land was ahead came digitally from the GPS maps. Even from the top deck of the Hanse Explorer, there was no clear evidence that land was nearby until we were within a couple of miles from shore. As we got closer to the island, we realized why it was so hard to see land…because it is only a thin layer of land above the sea. Each of the Line Islands is extremely low elevation, with the highest point hardly exceeding 2 meters (about 6 feet) above sea level. So what about the vegetation, you may ask, that will increase the height of the island significantly? Everything from the native Pisonia trees through to the coconut palms stand many meters above the ground and can make seeing an island much easier from a distance. Here is where Starbuck island is somewhat striking – the entire population of trees on the island is about 25 coconut palms. It is an island that is about 10 km long, 1-2 km wide, and there are only 25 trees. It turns out that a low island without trees is really difficult to see at a distance!

The low profile of Starbuck is a change from Flint and Vostok. These other two islands had well developed and lush forests, with the profile of the vegetation shaped by the prominent wind patterns. The biggest difference among the islands is the patterns of rainfall. The warmer waters of Flint and Vostok are coupled with more evaporation, cloud development, and ultimately rainfall. The cooler water around Starbuck results in fewer clouds and less rain.

So, in the end, perhaps we are not fully wasting our time sitting on deck in the morning staring at the landscape of this vegetatively spartan island. As we stare, we are absorbing the intimate linkage between oceanographic conditions and biology; we see that the land and the sea are not really that different.