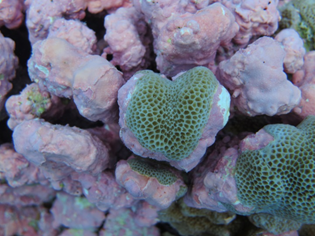 A Reef of Clones

Coming to a pristine reef raises expectations. One of these expectations concerns the ways in which coral cover increases on reefs such as those of the Line Islands. Increasing coral cover is nowadays a rather rare phenomenon on most reefs, but on the reefs of Malden, corals cover most of the bottom in shallow water suggesting rapid coral growth of existing and broken or fragmented colonies. In addition to growth, coral cover is often believed to result from high levels of coral recruitment and similar to coral growth itself, coral recruitment rates have dropped enormously in most places. Coral recruitment is the landing of planktonic coral larvae from the water column followed by settlement and metamorphosis and believed to be the most important mechanism through which corals can “reseed” reefs that have experienced total destruction through storms or man-related actions.

Scanning the reefs of Malden makes for a surprising observation. In this pristine reef community coral recruits are rarer than for example, most degraded reefs in the Caribbean. One doesn’t have to look for long to find the reason why. Everywhere the war for limited space progresses at a rapid pace and one can almost see reef organisms grow in real-time to claim this precious resource on remote and well-functioning reef ecosystems. Calcifying organisms grow over one another, often creating bizarre intertwined structures as they battle for space. Especially fast growing crustose coralline algae are successful in overtaking spaces not occupied by adult corals and rapidly overgrow recently recruited corals that disappear under this moving front of calcifying algae. Combined with the fact that these remote reefs likely receive few larvae from other locations, recruits on Malden are unexpectedly rare and represent an example of how reef dynamics (and the expectations derived thereof) differ from what we see in most parts of the world.

A detail of the reef bottom where corals and coralline algae battle for space resulting in nearly undefinable battle zones between the two groups.